Home News The tenth edition of TriestEspresso has started

The tenth edition of TriestEspresso has started 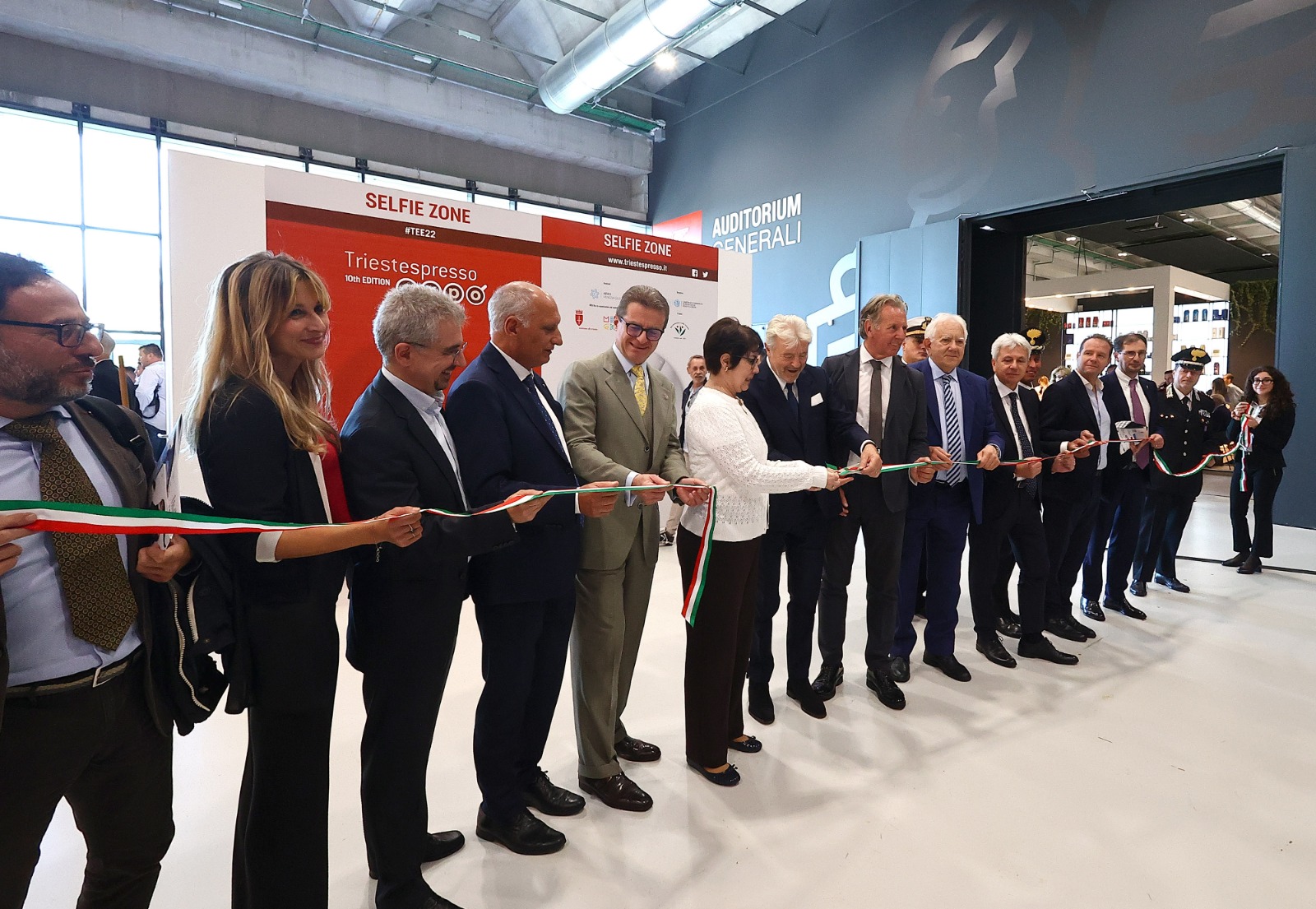 Paoletti: “This challenge was won thanks to the trust of companies and institutions”

The topics of the inaugural conference included raw materials, energy and the market situation

Sustainability, energy costs and raw materials. The tenth edition of TriestEspresso Expo opened this morning with a conference entitled “From coffee to espresso between sustainability and rising energy and raw material costs”. The Expo, which will end on 29 October, is a biennial event organised by the Venezia Giulia Chamber of Commerce through its in-house company Aries, with the joint organization and contribution of the Municipality of Trieste, the Convention and Visitor Bureau and in cooperation with the Associazione Caffè Trieste.

The Chairman of the Venezia Giulia Chamber of Commerce, Antonio Paoletti, in his speech at the opening of the convention, moderated by Angela Hysi Vicentini, editor of the on-line daily newspapers Comunicaffé and Comunicaffe International, began by thanking the exhibitors, 160 from 13 countries, and visitors, from 42 countries around the world, “I know that you love Trieste and TriestEspresso Expo. It was not to be taken for granted that we would have such a strong result in this tenth edition after the lockdowns due to Covid. The sector was among the hardest hit because of the lockdowns, then came the war in Ukraine, the high price of raw materials and energy. After the pandemic, the war in Ukraine added further complications to the economic situation in Europe. Now for this event the new facility can accommodate 160 operators thanks to the expansion of the space with two marquees. It is a trade fair and those who come to TriestEspresso Expo do so to conduct business, to get to know and to be known. Over the next few days we will be tackling various topics, because for the Italian economy coffee is a sector with a significant economic and image value.”

The Mayor Roberto Dipiazza stressed “the great commitment of the institutions to support the city, businesses and citizens in facing this difficult period. However, Trieste is growing and it is right to grow and invest in sectors that are currently experiencing a positive trend, such as tourism and in particular the conference sector. TriestEspresso Expo is an important event in this context and presents Trieste’s excellence in coffee to operators from all over the world.”

Giorgio Rossi, municipal councillor for culture, sport and youth, highlighted the critical issues: “There is concern about this crisis but I am confident in this long wave. Trieste is emerging from stagnation and is growing with the weapons and strength to move forward thanks to the excellent synergy among the various bodies. TriestEspresso Expo is an outstanding event hosted at Tcc, but we are working on many fronts to continue to make the city grow.”

Fabio Scoccimarro, Councillor for Environmental Protection, Energy and Sustainable Development for the Friuli Venezia Giulia Region, has no doubts and “coffee is a tradition that goes back a long way and Trieste has always been the coffee capital of the world, both in terms of culture with its historic cafés, but also in terms of trade. Circular economy and sustainable development are indispensable topics, we have numerous projects underway and we want to anticipate the green deal, as a region, to 2045 rather than 2050. To support businesses and families, the regional council led by the Chairman Massimiliano Fedriga has put more than EUR 150 million on the table, both in terms of contributions and investments. Today we need a European commitment to reduce the cost of energy.”

Fabrizio Polojaz, Chairman of Associazione Caffè Trieste, recalled that in recent years coffee quotations had remained essentially stable until the autumn of 2020, since which time they have started to increase dramatically, still placing both arabica and robusta among the highest levels of the last ten years. The reasons were varied, partly based on differences in expectations of supply and demand that arose with the pandemic crisis and its aftermath, although financial speculation played a good role. It is indispensable to read not only the data offered by the market, but also the news about coffee and the contexts in which it is found. What is needed is a stock market regulation that protects the economic operators in the chain by giving them priority over the financial ones.”

For Omar Zidarich, Chairman of Gruppo Italiano Torrefattori Caffè, “the price per cup will rise and we mere mortals will be forced to pay a higher cost due to heavy increases. Coffee roasters use ‘gasivorous’ systems, but the repercussions are felt throughout the supply chain: from the bean to the cup. Two years ago, the price of electricity was 125.6 euro per megawatt-hour, today it is 436.28 after a peak of over 540 euro.  Jute has risen by 70%, pallets by 300%, 500 kg containers for coffee roasters by 44%, ceramic cups, baked in ‘gasivorous’ ovens, have increased in price by 28%, packaging per kilo has risen from 0.07 cents to 0.56 cents, coffee machines – in addition to increases in raw materials and delivery delays – have a production cost of +150%. Our advice is to increase the price of the cup: we all have to be willing to pay a few cents more to keep up the quality of Italian espresso, recognised all over the world as a quality beverage, but in Rome with the price increase there has been a drop in sales of -28%, so we have a problem throughout the supply chain.”

According to Massimiliano Fabian, Chairman of the International Coffee Organization (ICO), “the circular economy is one of the cornerstones of the International Coffee Organization’s 2022-2023 programme, particularly in this year in which I will be Chairman. One of the pillars of the circular economy is sustainability, which has direct repercussions on respect for the environment. For the ICO, talking about the environment is crucial from the point of view of both producing and consuming countries.

Marcello Guaiana, Project Manager for Circular Economy at Area Science Park, presented a case of application to the coffee sector of a geo-referenced tool known as SISSI – Strumenti Informativi a Supporto della Simbiosi Industriale (Information Tools to Support Industrial Symbiosis), developed as part of the ARGO programme called “Green Technologies for the Ecological Transition”. “With SISSI, Area Science Park researchers intend to assess, together with the roasting companies, the feasibility of tangible industrial symbiosis operations by making use of production waste in the Trieste hinterland, with a method that can be replicated in other territorial contexts in the FVG region, going as far as the possibility of producing biogas.”

Andrea Giorgiutti, Director of the Production Quality Enhancement Service – Central Directorate for Agri-Food, Forestry and Fisheries Resources Fvg Region stated that “the sustainable and circular bio-economy includes all sectors that involve resources of a biological (renewable) nature, including also the related use, processing, distribution or consumption. On a national basis, the primary production (agriculture, forestry and fishing) and food sectors account for two-thirds of the value of the bio-economy (turnover and employment) and are closely linked to other important production sectors such as clothing, wood, paper and energy. The Friuli Venezia Giulia Region, also by virtue of its distinctive features in innovation, has great potential in terms of the growth of its bio-economy, to the benefit of its objectives in terms of production, employment, resilience and sustainability in the meta-sector.”

In the afternoon, among the events held in the exhibition centre, the presentation dedicated to Brazilian products was of particular interest.

Brazil is traditionally the world’s largest producer and exporter of coffee, a crop and culture that symbolises the excellence of the Brazilian agri-food sector. It is the product “made in Brazil” with the highest number of geographical indications (GIs) registered with the National Institute of Industrial Property (INPI). This afternoon’s speakers included Marcos Matos, Executive Director of the Council of Coffee Exporters of Brazil (CECAFÉ), who presented “Coffee from Brazil: Quality, Sustainability and International Trade”, and Alessandra Almeida, Executive Director of the Santos Coffee Museum, with “Journey to the Land of Coffee”. Completing the Brazilian participation will be a space dedicated to the exhibition “Journey to the Land of Coffee”, from the Santos Coffee Museum, with a historical perspective of the Brazil-Italy relationship and an overview of the sustainability of Brazilian coffee production. The aim is to take the public on a journey between past and present, showing the passion for coffee shared by the two peoples.

As part of Coffee Today, the discussion focused on the role of women.

“Women in coffee: the female point of view as a driving force for the development of the sector” was the title of the round table organized as part of the Coffee Today events and which featured a number of prominent women engaged in different roles within the supply chain. Speakers included Giulia Camparsi from Fairtrade Italia, Theresa Sandalj from the Sandalj Trading Company, Francesca Oberti from BWT Italia and Arianna Mingardi from Amigos Caffè. The meeting was moderated by Paola Campana, founder of the Campana caffè brand and columnist for Coffee Today.

The exhibitors come from Italy, Tanzania, Spain, Slovenia, Germany, Malta, Ethiopia, South Korea, Greece, Belgium, Switzerland, Turkey and Brazil, with a total of 160 stands distributed between the 8,000 square metres of the Tcc and the 2.6 thousand square metres created by means of marquees outside the Trieste Convention Center. Visitors from as many as 42 countries have already pre-registered for the event, demonstrating the great expectations aroused by TriestEspresso Expo and the new location that will host the world coffee economy over the three days in Trieste.

By using this site, you accept the use of cookies more information